In a world where threats are continuously evolving, LLNL works diligently to help the nation prevent and mitigate catastrophic incidents arising from biological, chemical, radiological, or explosive materials. With unparalleled expertise in threat and risk assessment, detection of threat materials, understanding and mitigating the consequences of attacks, and forensic analysis, the Laboratory provides a major component of the nation's defenses against the catastrophic threat posed by the malicious use of weapons of mass destruction. The Forensic Science Center (FSC) serves the short- and long-term needs of agencies responsible for monitoring and verifying compliance with international treaties and agreements, such as the Chemical Weapons Convention through the Organisation for the Prohibition of Chemical Weapons. This work established the FSC’s ability to tackle chemical threats from a traditional forensic science capacity but has also allowed us to expand research into the development of compounds that can counteract or reverse the physiological response to toxic chemical exposure.

One of our current projects, funded by the Defense Threat Reduction Agency, aims to develop a nerve agent antidote that can permeate the blood–brain barrier (BBB). Nerve agents exploit this membrane, which separates blood from extracellular fluid in the central nervous system (CNS). Traditional antidotes like pralidoxime can protect the peripheral nervous system, but the CNS remains vulnerable. This research builds on traditional antidotes, seeking new, more powerful drug candidates capable of crossing the BBB thereby protecting both the peripheral and central nervous systems and ultimately reducing the risk of death upon exposure to nerve agents.

Working alongside other Livermore teams on this national security project, the FSC relies on computational modeling and pharmacokinetic analysis while providing both synthetic and analytical expertise. This project has produced two important developments at LLNL: First, a highly predictive computational approach allows researchers to rapidly predict a small molecule’s BBB-crossing ability without any in vitro assessment. Simulating candidate performance is relatively quick and efficient and can screen many more candidates than can be done in the laboratory. Second, accelerator mass spectrometry is being used to perform pharmacokinetic measurements of radio-labeled versions of drugs in biological systems, enabling us to perform extremely sensitive measurements to validate computer simulations and provide direct experimental data. This work was recently highlighted along others’ research in an article in Science. 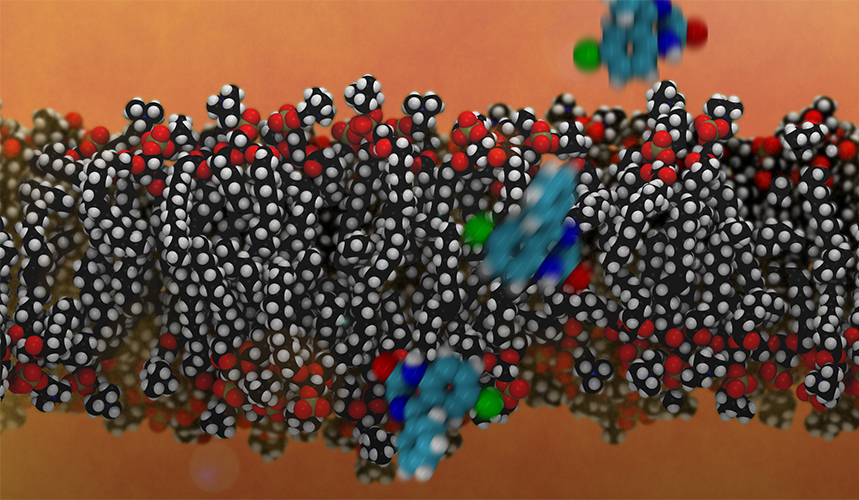 Diagram showing the simulated crossing of oxime LLNL-02 through the BBB bilayer. Due to its neutral nature, LLNL-02 has the ability to cross the lipid bilayer and deliver protection to the brain against nerve agents.

Another area of research, funded by LLNL’s Laboratory Directed Research and Development program, seeks to develop countermeasures to fentanyl, an opioid 10,000 times more potent than morphine. Very recently, this and related compounds have been associated with post-therapeutic chemical dependencies and as unanticipated components of illicit drugs. We are investigating the ability of cyclodextrins, cyclic carbohydrates, to neutralize the effects of fentanyl by binding it within its hollow central cavity thereby reducing its bioavailability. Starting with commercially available cyclodextrins, we have used a combined experimental and computational approach to screen modified cyclodextrins with enhanced affinity for fentanyl and its analogues.

This work has resulted in the identification of a specialized cyclodextrin with an affinity for fentanyl approximately 250 times greater than its commercial counterparts, signifying that significantly less countermeasure is necessary to neutralize a given amount of fentanyl. Perhaps more importantly, this cyclodextrin was observed to be generally applicable to a wide range of fentanyl-type compounds suggesting it would be a broad-spectrum therapeutic to fentanyl misuse. The FSC is currently working on patenting this technology and hopes to test these compounds in both in vivo and in vitro systems. This and related research was recently featured in an article in Vice.