Forensic Science Center (FSC) scientists are among the leaders in nuclear forensics—the chemical, isotopic, and morphological analysis of interdicted illicit nuclear or radioactive materials, along with any associated evidentiary items. Nuclear forensic work at LLNL began in the late 1980s as an outgrowth of the nuclear test program, and it takes advantage of the FSC’s capabilities to decontaminate paper, hair, fibers, chemical explosives, and other conventional evidence from crime scene exhibits for the Federal Bureau of Investigation (FBI) and other government agencies. As part of LLNL’s national security mission, FSC staff have a primary role in international efforts to develop new methods of discouraging the illicit trafficking of nuclear materials. 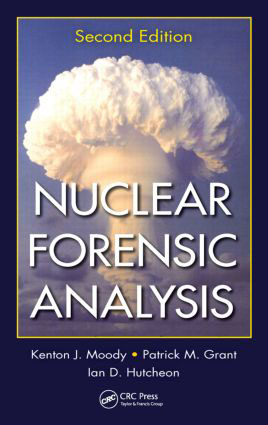 A Textbook for Nuclear Forensic Scientists

Nuclear Forensic Analysis, written by FSC scientists Ken Moody, Pat Grant, and the late Ian Hutcheon, is the first primary reference source for nuclear forensic scientists. The book also serves as a textbook for traditional radiochemistry science courses that include material on nuclear forensics. Now in its second edition, the book covers the principles of the chemical, physical, and nuclear characteristics associated with the production and interrogation of a radioactive sample; protocols and procedures; and attribution. The authors discuss principles and techniques used in numerous case studies of nuclear investigations conducted at LLNL.

In 1991–1992, law enforcement experienced a sharp worldwide increase in the number of general radioactive material seizures. The loss of lawful control, combined with the availability of nuclear materials on the international black market, was associated with the significant social upheaval following the demise of the Soviet Union. While most illicit transactions were hoaxes, approximately 20 interdictions involved weapons-grade or weapons-usable special nuclear materials (enriched uranium or plutonium), in quantities up to 5 kilograms and isotopic enrichments up to 90–100%. These circumstances within the nuclear domain stimulated a modern re-emergence of nuclear forensic analysis as an applied discipline. The fledgling FSC was a pioneering laboratory in the field’s ensuing development.

The initial FSC nuclear forensic investigation in the public purview was the fatal explosion of a “cold fusion” experiment in 1992. It was also likely the first examination to combine route analyses with source measurements for cohesive evaluation of an incident. Since then, we have conducted extensive casework on smuggled nuclear materials and various nuclear scams. The FSC has analyzed all but one of the international, weapons-worthy, special nuclear materials (SNM) seizures since 1996, and we are the prime support laboratory for SNM analyses for the FBI, the lead federal agency for all weapons of mass destruction casework. Today’s law enforcement criminalistics laboratories conduct traditional forensic examinations in approximately two dozen categories of conventional evidence. Of those, the FSC has applied all but four of them in our performance of real-world nuclear forensic casework.

Many of the techniques used in traditional criminalistics are also useful for nuclear forensic analysis, such as microscopic analyses of fibers and packaging materials. However, in nuclear forensic analysis, radioactive elements are analyzed, so the procedure used depends on the type of sample and its radioactivity. Forensic scientists must determine, for instance, whether a sample is emitting large amounts of alpha particles or gamma rays; whether it is plutonium or uranium; or whether it is a solid, mixed powder, or liquid. Accordingly, the FSC uses a tiered approach in which the results from one analysis guide the team in performing subsequent analyses.

We typically divide a nuclear forensic investigation into two complementary areas. Source analysis characterizes the radioactive component(s) of a sample set according to identity, quality, age since last purification, and production history. This analysis includes identifying signature species that distinguish one nuclear or radiological material from another, and they may enable researchers to identify the processes used to initially create a material. Our scientists are developing such signatures for a variety of nuclear materials (e.g., enriched uranium) with a goal of developing validated material profiles across the entire nuclear fuel cycle by experimental measurement or simulation.

The second aspect of an investigation is route or pathway analysis of nonnuclear substances found with the radioactive material. This approach incorporates methods similar to conventional crime laboratories’ practices in evaluating the collateral evidence. As a sample is moved from place to place, it picks up clues from the environment. Analyses may result in biometrics of the traffickers (fingerprints, DNA, organic compounds), route(s) traversed by the material (soils, cloth fibers), recent storage locations (dusts, pollens), and other timely information that contributes to an overall assessment and/or further interdictions or arrests. If radioactive material has been stolen or came from an historic production, source forensic analyses may not be particularly valuable to the focus of an investigation. Only route analyses may provide forensic intelligence on suspects and recent locations of the contraband.

By combining source and route evidentiary exhibits, a nuclear forensic analysis can be the most multidisciplinary of endeavors. Casework examinations by the FSC have required expertise in nuclear science, physics, chemistry, isotope geochemistry, biology, engineering, materials science, metallurgy, statistical analysis, and other disciplines.