At the Waste Isolation Pilot Plant (WIPP) in Carlsbad, New Mexico, nuclear waste drums were modified to utilize kitty litter as a “greener” absorbent packing material. In 2014, a 55-gallon barrel exploded, exposing 21 workers to airborne radioactive material. Livermore’s Forensic Science Center (FSC) joined the investigation team, which discovered that organic, wheat-based kitty litter had been substituted for the historically used clay variety. The litter reacted with nitric acid, nitrate sales, and oxalate in the waste. Gases built up inside the drum until the pressurized lid failed, releasing the radioactive material. Although hundreds of drums contained the same combination of chemicals, only one exploded before the contamination was discovered and remedied. FSC participants in this investigation were awarded the U.S. Secretary of Energy Honor Award, the highest uncompensated award bestowed by the Department of Energy. Read more about the case.

Uranium ore concentrates (UOCs, also known as yellowcake) are produced at mining facilities from uranium-bearing ores using several processes that may include different reagents, separation procedures, and drying conditions. For years, one of the primary methods for determining the different types of uranium was a simple visual color inspection by evaluators. However, visual conclusions can be quite subjective, and no chemical information is provided. Using near-infrared spectrometry, FSC researchers have been able to measure the chemical properties of UOCs. Leveraging this technology could rapidly provide information on the origin of uranium samples to law enforcement officials who interdict smuggled materials and may be useful in preventing future trafficking from black-market sources. Read more about the case. 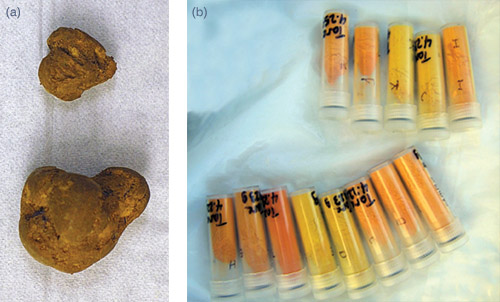 (a) A sample of uranium oxide is shown before its chemical composition has been analyzed. (b) A suite of known uranium oxide samples is used in comparison studies.